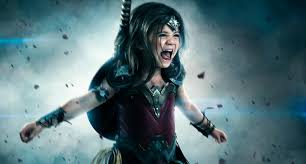 The diagnosis of cancer elicits fear and dread in the heart of anyone who hears it. Those feelings become even worse when the diagnosis is for your child. A child with cancer or serious disease can seem incredibly unfair and not make sense, but photographer Josh Rossi wanted to do something to help this. He wanted to turn a situation that usually feels hopeless and frustrating, into something a little more positive.

He photographed kids with rare cancers and disorders as particular superheroes to show their inner strength. He wanted them to see themselves in a way that would make them smile and feel strong. He photographed Sofie Loftus, Teagan Pettit, Simon Fullmer, Zaiden Stolrow, Mataese Manuma, and Kayden Kinckle.

He dressed Sofie Loftus as Wonder Woman because, at the time of the photo shoot, she had just gotten done with radiation therapy which is exhausting and draining.  She still posed fiercely for him, so he felt she was the perfect Wonder Woman. Sofie’s dad says she has not complained since starting her treatment. He also said the photo shoot helped to change her outlook on her situation.

Teagan Pettit was our Superman. Rossi picked him for Superman because he was born with only half a heart. Superman and Teagan have similar weaknesses in that Superman grows weak when Kryptonite is near, and Teagan can’t regulate his temperature due to his heart. Even though Teagan only had half of a heart, he has a heart of steel just like Superman.

Simon Fullmer was Batman. Having neuroblastoma, he’s had to deal with a lot of adversity, and he doesn’t beat around the bush about it. He wants you to tell like it is which makes him a perfect Batman.

Zaiden Stolrow is The Flash. He has severe ADHD which is why the Flash is such a natural fit for him. His high energy makes school and making friends a challenge for him, and his mom said that when he started to lose friends, she saw the “light leave from his eyes.” Rossi hopes that the handmade costume will give him confidence and make his schoolmates see him for who he really is.

Matarese Manuma is only two years old and dealing with a rare form of cancer. He is Aquaman and at the time of the shoot had just gotten done with a round of chemo. Rossi says he is a powerhouse and made the perfect Aquaman because of that and also because they are both of Polynesian descent.

Lastly, we have Kayden Kinckle. He is our Cyborg, and to me, this is probably one of the best matches. Kayden is a double amputee because he was born with his organs outside of his naval. The only way to save him was to have his legs amputated. Similar to the story of Cyborg whose father kept him alive by making robotic parts for him.

Seeing themselves turned into superheroes made these kids feel confident about fighting their individual battles. It reveals the inner strength in each of them. The costumes that they wore were handmade for them by a woman named Julie Whiteley so they can always have a memento of the special day.

Watch The Full Story Below! 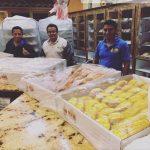 While Being Trapped By Flood, Bakers Make Hundreds Of Pan... 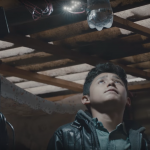 This Ten-Year-Old Invented Light Bulbs Out Of Plastic Bottles And...