by Natassia Howard
3 years ago3 years ago
113views
0

Setsuko Harmon is a grandmother, and unfortunately, she also has Alzheimer’s. Harmon was diagnosed with the illness about eight years ago and has short-term memory loss.

Alzheimer’s affects more than 44 million people throughout the world, and with its primary affect short-term memory, it is often heartbreaking to see its patients.

Stone introduced the infant to her mother, Harmon. While Alzheimer’s is heart-wrenching, these new parents are celebrating it in the best way.

Every time Harmon was told the infant was her granddaughter, she reacted with a bright smile and a loving expression on her face.

The grandmother’s reaction went viral earlier this year when she reacted with warmth at the pregnancy announcement over and over again. This time is just as sweet.

The 77-year-old grandmother meets her granddaughter for only two hours.

Stone can be heard telling her mother that the baby is hers, and reminding her that she is the grandmother.

Harmon adores Sadie, and her reaction proves it every time.

Even when she is surprised to see her, she still asks who’s baby it is and smiles with joy when she is told. She even wants to take the newborn home.

Watching her mother’s memory disappear hasn’t been easy on the family, but apparently, Harmon still recognizes her husband and daughter. For that, she says, she is very thankful.

Stone says she only videos the right moments, though, and not the bad ones.

Stone recalls “She remembers the words to an old Japanese lullaby, and sings it to Sadie a lot.”

She also said she doesn’t expect her to remember, and her mother’s excitement fuels her own every time.

Harmon’s reaction is indeed contagious, and people everywhere are reacting to it warmly, and with similar affection.

While Stone knows the reality behind her mother’s warmth and happiness every time she is introduced to her granddaughter, she still chooses to look at it in a positive light. She remembers it as a good memory, instead of a sad one. 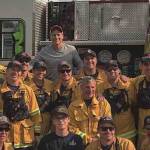 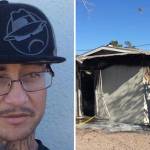 Homeless Man Rescued Two Kids from A Burning House When...